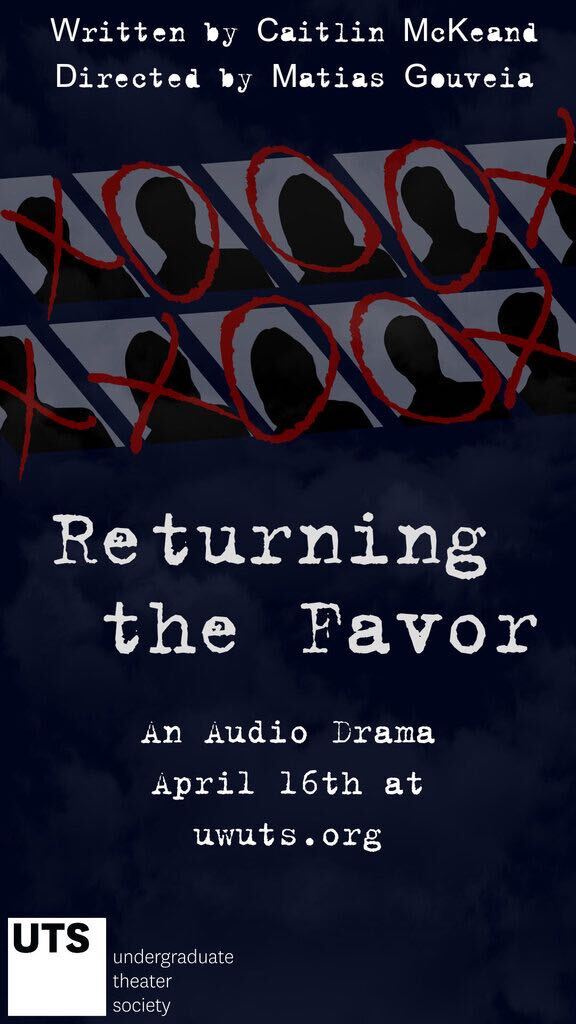 After traveling to an empty mansion for a senior year graduation party. Eight teenagers quickly realize that they have been locked in. When they start dropping one by one, it becomes clear that someone is picking them off, and it could very well be one of their own!

** This play is an audio drama.

Matias Gouveia is a 3rd year Drama Major at UW. He is very happy to bring you Returning the Favor, his directorial debut. Matias would like to thank his partner Izzy, his Stage Manager and Sound Designer Sandra, and his wonderful cast. If he were in a horror film, he would win "Most Likely to Die Due to Clumsiness"

Sandra (she/they) is a fourth year student at the University of Washington studying Drama with a minor in Spanish. Returning the Favor is her first rodeo as a stage manager and she could not have asked for a more amazing team to work with! She would like to thank Ty for his vision and his friendship, UTS for their guidance and patience, and her partner Nathan for bringing her snacks while she edited. In a high school horror flick, she would be Most Likely to Insist That There Is a Logical Explanation for All of This.

Abigail Dominguiano (she/her) is a Senior studying both Drama: Performance and Communication - with a minor in Diversity. She was last seen in the pre-pandemic UTS Winter New Works Production: Check This Shhh Out! If she was in a high school horror flick, she would snag the superlative for “Most Likely to Ask if the Kool-Aid is Vegan Before Chugging It”. She gives a massive thank you to the cast and crew for the creativity, laughter, and game nights during this entire process. Enjoy listening and leave no one behind. ;)

Bailey Griffin (she/her) is a graduating senior in civil engineering. She grew up in a small-ass town that didn’t offer chemistry, calculus, physics, or drama. After a lifetime of desperately wishing she was a Theater Kid™️, Returning the Favor is her acting debut. Most Likely to Still Be Alive in the End Credits. She would like to thank her best friend Emdi for their tenacious encouragement, and their younger siblings Qatin and Abdirahaman for watching Avatar with her.

Jerena is super excited to be a part of her first production with UTS! She will be graduating from UW later this spring with her BA in Sociology and Drama Performance. If she were in a horror flick, she would win Most Likely to Give Up and Accept Her Fate First.

Nate Maszak is a Junior majoring in Drama with a focus in performance. This is his debut with UTS. Besides talking about himself, he also enjoys writing bios in the third person sometimes, at least that is what he told me. Most Likely to Call Out the Murderer Accidentally.

Alek is a graduating CS major in his first UTS production. He loves RPGs, tennis, and discovering random bits of information. His passion for voice acting and stage acting started in elementary school, really taking shape in the back half of high school. Definitely "Most Likely to Investigate the Scary Sound Alone".

Nathan (he/him) is a second-year transfer from the University of Minnesota currently double majoring in math and physics. He was going to be in last year’s Stage Notes production of Mamma Mia, but because that was cancelled, this is his debut production! Given his quick wits and relentless determination (not to mention dashing good looks) he would win Most Likely to Die Offscreen in a horror flick.

Daisy Schreiber is a freshman who just declared her major in Drama! She's worked on a variety of shows around Seattle in high school, but Returning the Favor is both her first show at UW, and her first audio drama! Daisy is scared of everything, all the time, so she's a great candidate for "Most Likely to Stay at Home Watching Netflix". If she had to enter the haunted house, there's no way she'd make it out alive.

Brittney Sides is thrilled to make her debut performance through UTS in Returning the Favor! Brittney is a recent transfer to UW and is a junior majoring in Comparative History of Ideas. Although never having worked with UTS before, she has been involved in theatre- both behind the scenes and on stage- since high school. If she were in a high school flick like Returning the Favor, she would be "Most Likely To Unknowingly Befriend the Killer".